For Manchester United, it was very much a case of ‘Paradise Regained’ last night at Old Trafford.  A comfortable 3-0 victory over struggling Aston Villa saw United through to their 20th League Title, though in truth, the really significant result had come at White Hart Lane the previous afternoon when an erratic Spurs team struggled against City for 80 minutes before exploding into life and scoring 3 goals in 7 minutes.

It’s actually less than a year now since that 20th title was snatched from our hands by Sergio Aguero’s 94th minute goal against QPR at the Council House.  In that time, it’s pretty much been all downhill for the Berties;  a mixed bag of summer signings with Nastasic the only real success, an indifferent Champions League campaign in an admittedly tough group, too many under-performing players and a lack of the intensity that took them to their first title since 1657 or whenever.  City should finish 2nd in the table but that will be scant consolation for the Etihad crew, who, you feel, will not rest until their corporate colours are all over the Champions League trophy.

By contrast, Fergie’s team talks for this entire season were probably done for him before the United players trailed despondently off the pitch at the Stadium of Light with the jeers of the Sunderland fans still ringing in their ears.  In the aftermath, most United fans were unanimous in the view that we were in desperate need of some  midfield reinforcements.  We got one, though I doubt that many Reds would have cherry-picked Shinji Kagawa from a grab-bag of Europe’s finest midfielders.  In the end, his season finished pretty well, but we have to be honest and say that the best is yet to come from him.  Fergie may be right when he says that Kagawa will do better next year and by then,  hopefully,  he  and Michael Carrick will have some high-quality company, given that Giggs is really restricted to cameos these days,  Scholes (and maybe Darren Fletcher) will probably retire and the likes of Cleverley and Anderson are no more of an answer now than they were a year ago.  Maybe the time has come to promote the seriously promising Ryan Tunnicliffe and Jesse Lingard to the first team.  They probably deserve their chance.

Most talk of United’s 20th title win has obviously revolved around Robin van Persie,  last summer’s  high price, high-profile  recruit from Arsenal.  Whilst there is no doubt that the Dutchman came at a premium price,  it is equally certain  that he has justified the outlay.  His Premiership goals may have come at £1 million each, but for most United fans, they have been crucial in turning back the tide of opinion that said that United’s time was over and the future belonged to City.  History suggests that United’s time of dominance will eventually come to an end, but not, one suspects, on Ferguson’s watch.  With Rooney, Welbeck, Hernandez,  Owen  and Berbatov on the books and some promising youngsters coming through , I suspect that few United fans would have seen another striker as a priority. Yet therein lies Ferguson’s special gift; an ability to see what someone like van Persie could add to the mix.  Exit the sadly under-appreciated Berbatov and the injury-prone Owen and in came our new # 20 to boost us to Championship # 20. 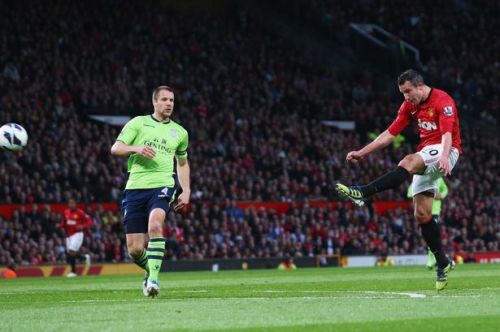 From the very beginning, it was clear that RvP, mercenary or not, was likely to follow in the footsteps of Teddy Sheringham and earn his first title as a United player – to the despair of most Arsenal fans.    However, it is equally clear that he had some key accomplices.

David de Gea probably began the season on a par with Anders Lindegaard, but over the season has gone on to establish himself as top dog in the goalkeeping stakes.  I feel for the genial Lindegaard, but the brutal fact is that United paid the best part of £20 million for De Gea, so it was always likely that they would persist with him unless he really screwed up.  He has had some dodgy moments, but then,  so has  Lindegaard and De Gea is finishing the season looking a far better goalkeeper than the one who began it so hesitantly.

Rafael da Silva has had a great season and established himself as United’s first-choice right back whilst Patrice Evra has bounced back after a wobbly season last year and also discovered a scoring touch that few of us suspected he had.

The centre of defence has resembled A&E at times with Vidic and Ferdinand having to be nursed through the season and Smalling, Evans and Jones all picking up injuries along the way – none of which has made life any easier for De Gea and Lindegaard as the line-up ahead of them has changed from week to week.  General view would be that all parties have done OK most of the time, but that Rio Ferdinand and Phil Jones are the ones to emerge from the season with the most credit.

Two of our mainstays – Rio and Michael Carrick – celebrate # 20

Our wide players have been hugely disappointing on the whole – here I am talking specifically about Tony Valencia, Ashley Young and Nani rather than players like Giggs or Welbeck who played out wide from time to time.  Ironically, Valencia seems to be recovering his form of last season just as this season is coming to a close.  Both Young and Nani could be out the door this summer if the price is right.

Central midfield remains a minefield with only Michael Carrick really enhancing his reputation.  Shinji Kagawa began by looking very lightweight, then got injured but has come back strongly in recent weeks.  Still not totally convinced by him though.  Ryan Giggs has had a good season on the whole, but Paul Scholes‘  final furlongs have been dogged by injury and he will surely retire (again) at the end of the season.  Elsewhere both Tom Cleverley and Andes Ron (Anderson) have done little to enhance their claims for regular first-team football and Anderson will surely be offloaded – finally – in the summer.

Of the front players, only Robin van Persie has really had a top season.  For Wayne Rooney, Danny Welbeck and Javier Hernandez, there have been problems of one kind or another along the way.  Rooney is starting to look more convincing as a midfielder than he does up front, Welbeck just doesn’t score enough goals and Hernandez  increasingly seems to be used as an impact substitute.  Mind you, at least none of them try to eat the opposition…

A friendly Stretford End-er offers Patrice a bite to eat…

With our interest in all other competitions at an end, it’s really just a case of waiting to see who Fergie brings in during the summer – my vote would still be for strengthening the midfield and maybe replacing Young/Nani with a better wide option.  We shall see……