Living off the land……

As a non-gardening consumer of processed food of all kinds, a visit to my mate Barry is a bit of a revelation.  He  has a well-tended allotment about a 10 minute walk from his place in Derby and we were there yesterday picking raspberries…. 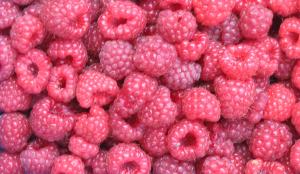 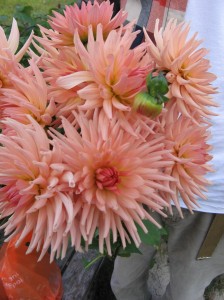 I thought it was October…..?  There were also savoy cabbages, courgettes, Little Gem Lettuces…a feast.  This time of year often produces a glut in certain crops and one guy in the allotment clearly had too many apples, so left a selection out for people to help themselves…. 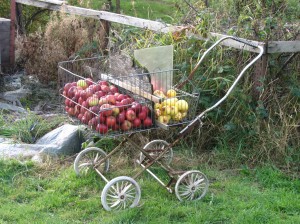 I find that there’s something rather re-assuring  about allotment culture, even though I’m not involved in it myself.  Real people still producing real food, maybe?  You meet some absolute characters at these places and once people have decided you’re OK, they are often very kind.  Barry is a vegetarian and it says something for his hard work that he rarely has to buy any vegetables between May and November – unless it’s something pretty exotic. Then again, he is growing globe artichokes at the moment…..

As if that wasn’t enough, we then drove out into the Derbyshire countryside, passed through Dovedale, over the ridge to the west and were heading south  in the general direction of Uttoxeter when Barry screeched to a halt, so we could pick several pounds of very ripe elderberries from bushes along the roadside.

We then stopped for a beer at The Three Horseshoes in Long Lane (that’s the name of the village) about 6 miles out of Derby, which is a really pleasant pub run by an Italian family. They serve Italian food and -amongst other things – a very dark and malty bitter called ‘Long Lane Bitter’, so presumably brewed locally.  It seems like a very nice pub and they further endeared themselves to us by allowing us to raid the damson tree in their car park and relieve it of several pounds of its fruit.  By this point, the back of the car was looking like a mobile market garden, so we returned to Derby to cook and consume some of our acquisitions…..

This entry was posted in Pubs & Restaurants. Bookmark the permalink.